Last week we were fortunate to visit Kokopo courtesy of a work trip for me, and then I just had to buy tickets for Jacinta and the kids (about K5000.00 worth!)…

We stayed at the marvelous Gazelle International Hotel where they had no problem shifting us around due to a really noisy band on Friday night, and then back into one of their larger rooms (hint – for a family, ask for an end room!).  The team there were fantastic, and the food was divine, in fact – I would say it was the best european food that I have eaten in PNG…  We were lucky to have the use of the companies single cab ute for the weekend, and spent plenty time driving and/or walking around.

We did go over to Rabaul and watch Mt Tavurvur let off some steam, and got a guided tour through a Japanese underground hospital (from WW2) and underground barge tunnels.  Mostly though, we enjoyed the peace of East New Britain, and were happy to walk around the markets, and just kick back and take in the real PNG.

I took A LOT of photos, as I do – so I thought I would leave you with a whole bunch of them 🙂  This first lot from Matupit Island (now a part of the mainland and accessible across an ash road, and of Rabaul.  If you do go there, travel into Matupit, and ask for Ray, he will tell you the history of the island and take you down to the shore.  Give him some Kina for his trouble and don’t forget to buy some craft from the local ladies. 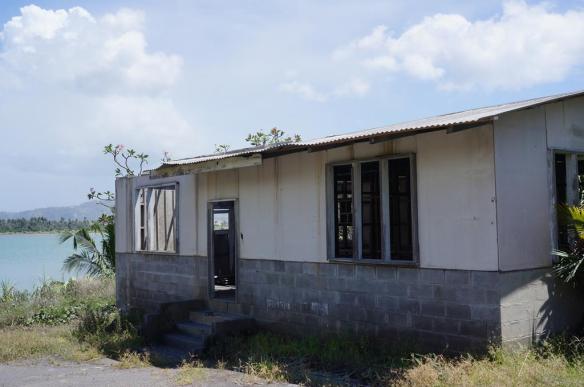 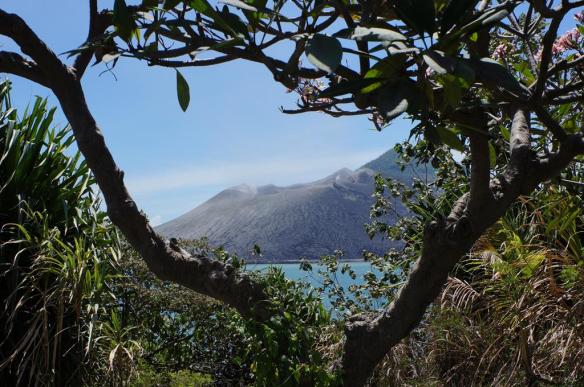 Tavurvur let off a little ash – amazing to be this close 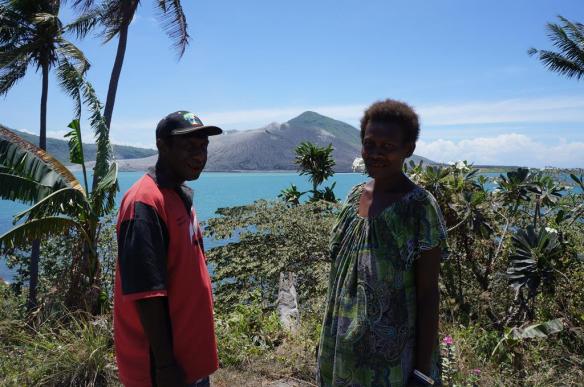 Met Ray in the village and he took us to this spot. If you want a guided tour and history, he is your man. Here he is with his sister. 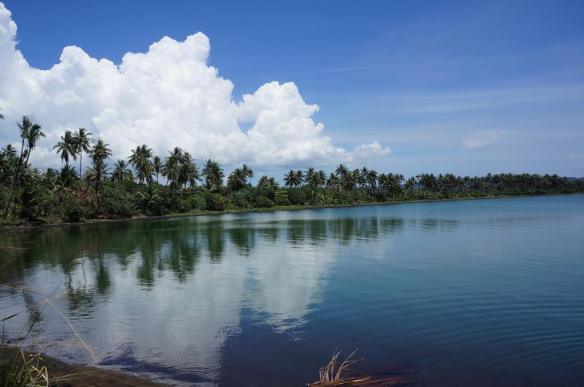 So pretty – yet only just starting to recover from the devastation 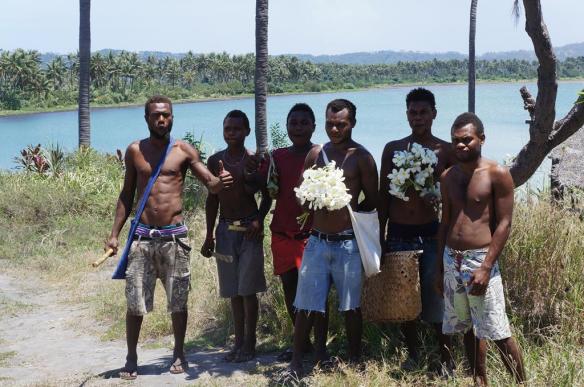 Some local lads from Matupit Island about to tend some graves. Jacinta kessim planti piksa (Jacinta took lots of photos) 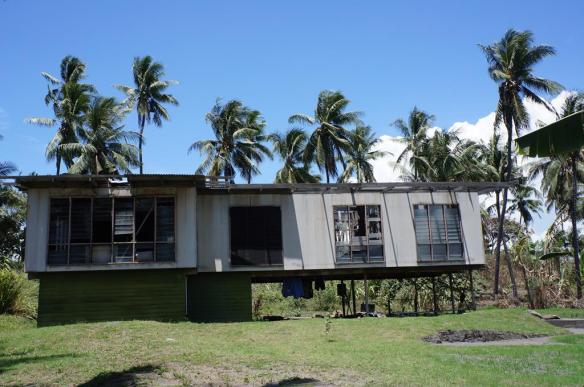 This is Rays Haus, the government paid for the small amount of roofing iron that you see, Ray has to live under the Haus… 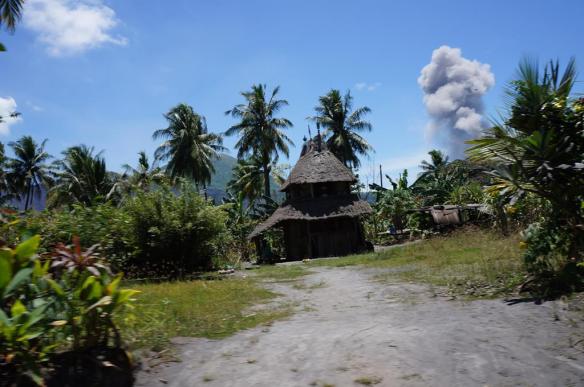 Tavurvur going off as we head back to the mainland 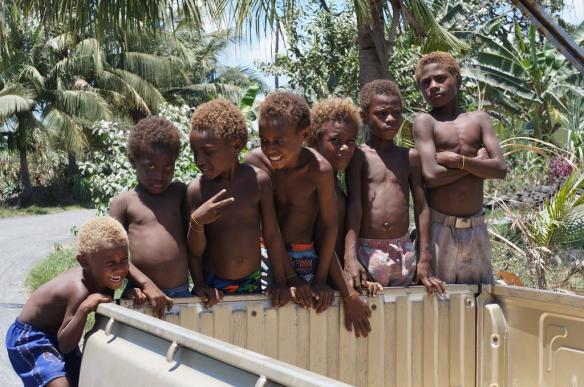 We stopped to buy some crafts from the local Matupit people – got this awesome shot of some local kids climbing on the back of the ute. 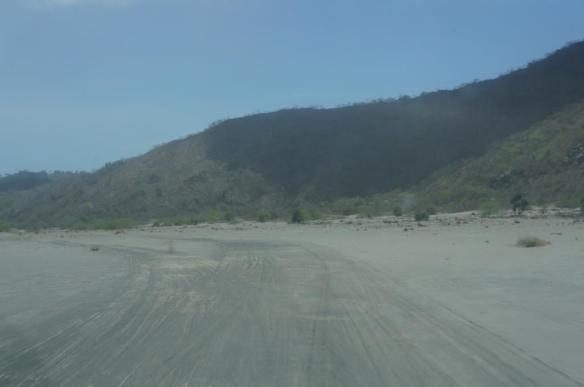 The road past Tavurvur to Matupit Island. Lucky we got across when we did as Tavurvur covered this just 30 minutes later 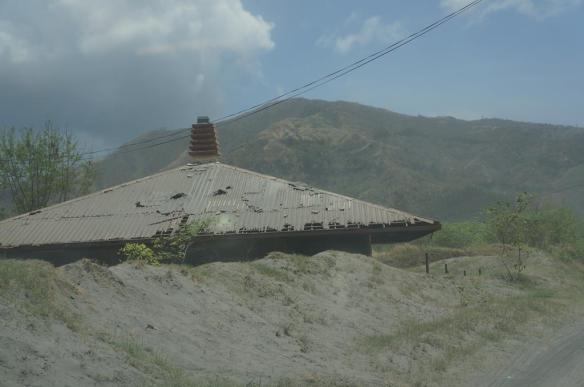 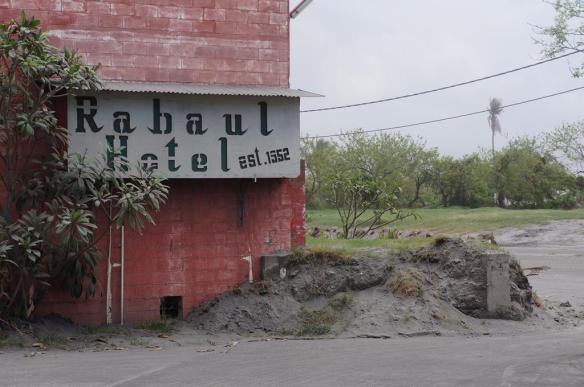 The Rabaul Hotel has been almost destroyed twice – but they keep it going. Amazing history being the oldest hotel in PNG. The swimming pool had a extra layer on it though 😉 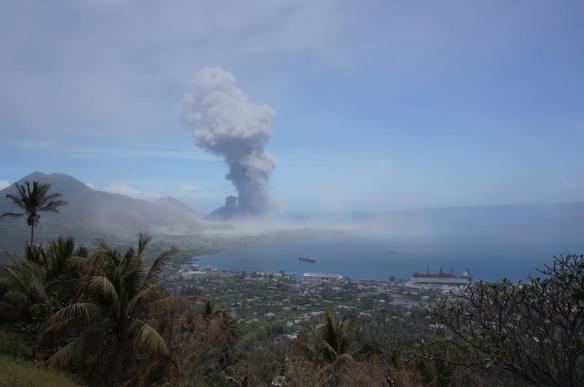 And then Tavurvur went BOOM! and blew ash into the air. This photo from the observatory, Matupit Island is off to the right of the volcano and covered in thick ash. Glad we got out when we did as it was still going 2 days later… 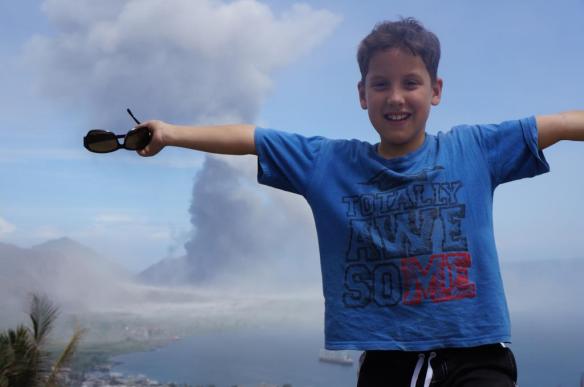 Xavier dressed himself for the occasion – I didn’t notice what his shirt said until reviewing photos today. TOTALLY AWESOME – buddy – how right are you? 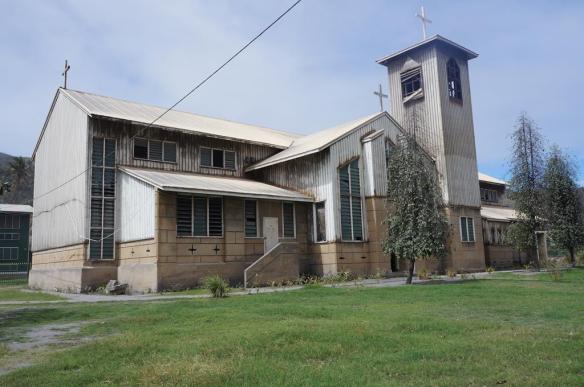 Rabaul is amazing – the determination of the locals to live there is incredible, and I highly recommend going there.

Check out all my posts